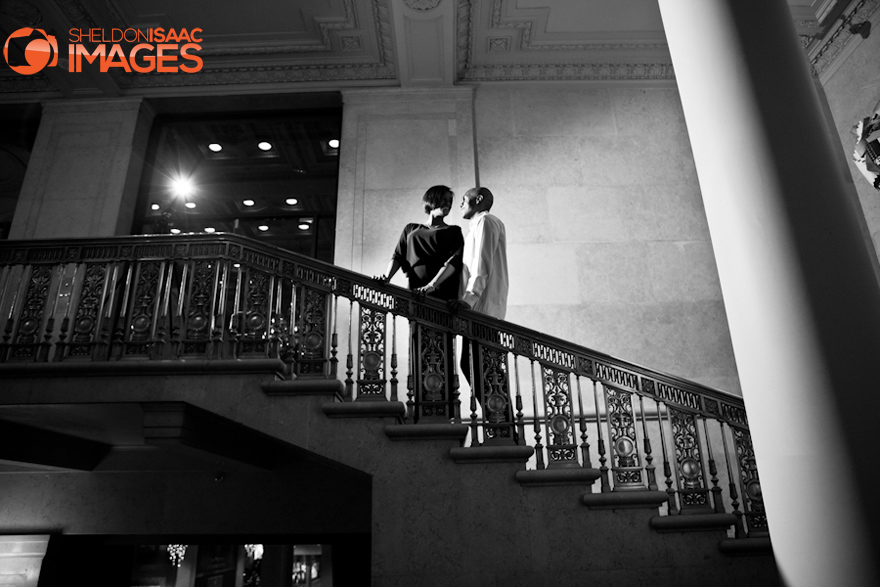 I like to have the couples I photograph tell me their story so I can build a shoot that has a theme about THEM.  I can suggest a number of local areas we can use as a backdrop for their engagement sessions but I love it when they tell me about a location that perfectly fits them.  For me, it would make NO sense having my photos taken while parachuting because I am not a fan of heights higher than a step ladder.  That shoot would start off as a portrait but would roll right into a funeral as I die from heart attack during the free fall.  I know I know, it’s safe with the parachute and all. #NoThanks. All I am saying is that the shoot is easier for the couples when it’s got a personal meaning.

For this photo shoot, I learned Jenn is a Banker and it would be fun to take photos inside an iconic vault.  Since I do not suffer from claustrophobia, THAT I can do.

We started the shoot at BCE Place in Toronto and worked our way to One King West Hotel.  This hotel’s vault and grand staircase allowed Jenn and Patrick to get all lovey-dovey surrounded by lots of metal. We also had some laughs along the way.  Photo shoots do not have to be boring!

Interestingly enough, One King West is the place I shot my first wedding!  Time flies and I’m enjoying the ride.

SI the “2 Feet on the Ground” Photosapien