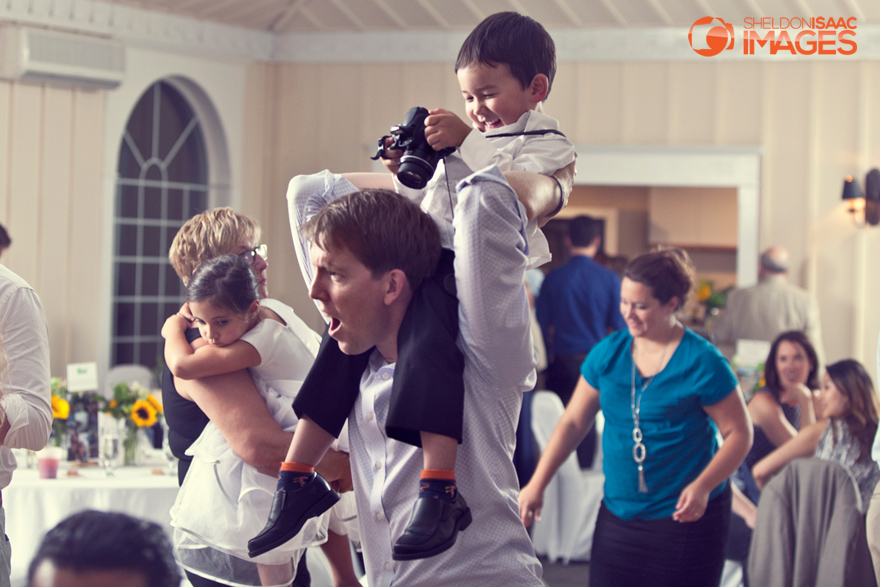 This picture reminds this old photographer some modern photography and life lessons.

On first glance, you see a 3 or 4 year old boy on the dance floor at presumably a wedding, perched on his Dad’s shoulders.  Lil guy has his Dad’s camera and is probably snapping 90 pictures a second and takes a moment to look at his handy work, but look again.

2nd Glance
I see a Dad who is trying to let off some steam and his crazy kid has begged him all day for his camera causing Dad to keep the camera out of sight and missed some great photos to keep lil crazy from tantrum-taking during a pin drop silent wedding.

3rd Glance
This reminds me to not to settle.  This kid doesn’t settle for a bunch of photos up people’s noses cuz he’s the mini human at 3ft nothing among giants.  He climbed up his dancing Dad for a better view.  He doesn’t just assume he got “the shot”, he has his Dad’s hands as his seat belt so he can balance and scroll through his photos.  If he didn’t like what he sees, I’m sure he’ll take it again.  Hopefully the moment isn’t gone.
Lastly, he’s having fun.

SI the “Too Big For Shoulders, But Not Too Big To Learn” Photosapien